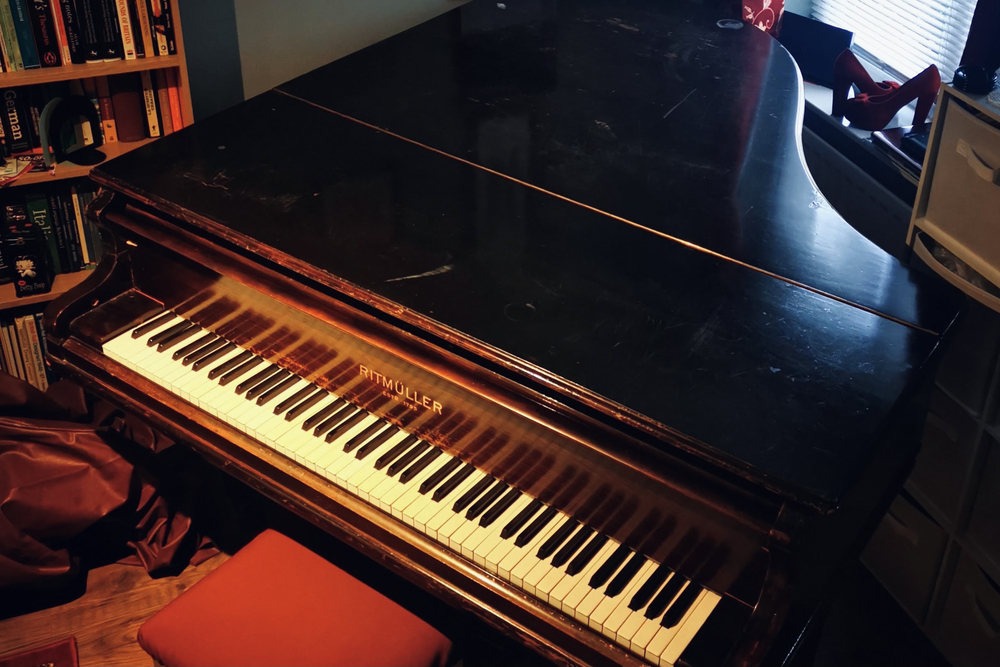 My baby (grand) and I

How hard can it be to refinish your own piano? Ekaterina Pavlova decided to find out

How many of us have an acoustic piano to practise on at home, one that pleases both the eye and the ear? Let’s face it, not many. Buying a piano has always been a balancing act between the price of the instrument, the quality of its sound, and its appearance. If you are able (and willing) to splash out thousands of pounds on a piano, you have many options. If this doesn’t apply to you, don’t worry. You are not alone. In fact, you belong to the majority.

After a very miserable first lockdown, I finally decided the time was right. And then the reality of the market hit me. I concluded that I was not ready to part with a large sum of money, but the perfectionist in me kept painting in my head a picture of evenings with family and friends gathered around a neat and beautifully sounding instrument.

I was almost ready to settle for a budget digital piano. And yes, I am fully aware that they are now much better than they used to be, but for me it is somewhat akin to the endless ‘e-book vs real book’ debate—some people appreciate portability and convenience while others, including myself, just need the real thing: there is nothing like real strings, vibrating inside a real piano, without the need for electricity.

A new home for an old baby grand

But then something happened. ‘Do you want a grand piano?’ someone asked me one day. Hmm … yes. Of course I do. Who doesn’t?

I thought it was a hypothetical question. Turned out it wasn’t—someone was giving away a baby grand. There was only one caveat, I was told. The exterior of the piano had seen better days. Well, I’d never look a gift horse in the mouth and, frankly speaking, I was too far over the moon even to think clearly—only a few days separated me from having my own baby grand! And I only had to cover the cost of delivery, so I thought I could just invest the money I was about to spend on a digital piano in my (not so) new baby grand instead.

‘Refinishing a piano at home’, I typed into Google. A second later I was scrolling through videos of professionals effortlessly turning old instruments into masterpieces, and only occasional article titles like ‘why you should never refinish your piano yourself’ (written by companies offering professional services—why am I not surprised?) seemed to disturb the utopia.

They don’t want you to Do It Yourself

The obvious truth is: companies don’t want us to become DIY experts. A quick search for professional restoration quotations comes back with some very impressive numbers—a makeover of a baby grand could cost you well over £5,000. A baby grand in average condition (mine isn’t).

Restoring a piano is, of course, a very challenging and time-consuming job—having done some of it already, I am not in a position to deny that. But give us lowly fans of DIY some hope!

Furthermore, some companies are very honest in stating that you would only get one restored if it’s very precious or has sentimental value. Which, by extension, means that for the majority of second-hand pianos, all hope is lost…

There are, however, lots of forums, blogs and YouTube videos in which piano players like me share their thoughts and experiences. Their stories are very encouraging.

I decided that, if they can, so can I. I think you can figure out from the title of this article why: I am a very pragmatic person, but something I learned about this piano made me very passionate about giving it a new lease of life. I’ll tell you later, promise!

In this series, I am going to share my progress; successes and failures alike. Maybe one or two of my experiences will help a fellow instrumental pragmatist. (Spoiler: I have nothing to regret!)

Amateur and community music
Instrumental music
Technology
Subscribe to the Olsen Verlag newsletter to stay informed about our latest articles and scores.