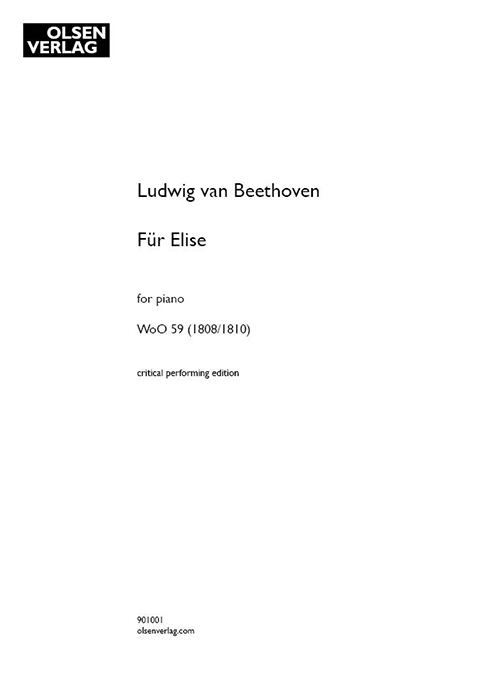 Beethoven’s Für Elise is one of his most popular works, and yet it was only published years after his death. Our new critical performing edition, edited by James Olsen and Elliott Park, is underpinned by the highest standards of musicological scholarship, and presents the musical text in clear, crisp print. It is accompanied by an historical note, an explanation of the sources used to produce the edition, and a detailed critical commentary. Printed on high-quality paper, it is robust enough to endure years of use.

Poor Beethoven (1770–1827). If he could have known that Für Elise would have become one of his most famous works, he would—as Jan Swafford puts it—‘have been astounded and probably outraged’ (Swafford 2014: 538). As well as being a key piece in the repertoire of young pianists, it is also an unmistakable earworm, appearing in television shows such as Futurama and The Fresh Prince of Bel Air, adverts for Adidas and McDonald’s, and on countless phones as a ringtone. While the fame of Für Elise today is indisputable, its history is not so clear.

Though multiple theories exist, the most widely accepted argument is that the piece was intended for a seventeen-year-old girl called Therese Malfatti, to whom Beethoven gave piano lessons and was intending to propose (Swafford 2014: 538). ‘For Elise on 27 April to remind you of L. V. Bthvn’ was apparently written at the top of the autograph copy of Beethoven’s Für Elise (Cooper 1984: 561). So did Beethoven misspell her name? The appearance of the name ‘Elise’, instead of Therese, is commonly attributed to the fact that Ludwig Nohl, who was responsible for transcribing the now-lost autograph copy for publication in the mid-nineteenth century, simply misread Beethoven’s handwriting (Cooper 1984: 561). However, a more endearing theory is that Beethoven used Elise as a pet name.

A man of average looks, known illness, and more than twenty years her senior, Beethoven was hardly a suitable match for Malfatti, but this did not stop him courting his pupil in a manner that today would no doubt lead to condemnation, if not criminal prosecution. One of Beethoven’s gushing love letters, written in May 1810, was accompanied by his first version of Für Elise, along with the words describing her absence from his life as ‘a void which cannot be filled and which even my art, which is usually so faithful to me, has not yet been able to make me forget’ (Swafford 2014: 537–8). The fact that the autograph copy was found among papers at the Malfatti household in the mid-nineteenth century is further evidence that Malfatti was the intended recipient of Für Elise, although some recent scholarship has challenged this theory (Cooper 2015).

Adding to the piece’s complicated history is its existence in various versions, the first of which, and the one gifted to Malfatti, is the version familiar to us today. Beethoven’s disorganisation when it came to ordering his compositions in his notebook has led musicologists to further confusion about the date of the first version: the main sketch dates from 1810 but another sketch, showing the main theme, was written in 1808 (Cooper 1984: 561). While we cannot know when the piece first came to his mind, we do know that he returned to the piece a decade later when preparing to publish it in a series of ‘bagatelles’, among other similar small forms he had concocted over the years. The autograph copy may now be lost, but still in existence is the first sketch of Für Elise with his later alterations, suggesting his discontent with the version ‘Elise’ received.

The manuscript of this piece is lost and, according to recent research, may have been placed in the coffin of one of Therese Malfatti’s heirs (May 2014). The first edition was published as part of Neue Briefe Beethovens, a collection of Beethoven’s writings, in 1867 by Ludwig Nohl (Stuttgart). A copy is held at the British Library (General Reference Collection 10921.f.4). The first single edition was published by C. F. Kahnt in 1870 (Leipzig), a copy of which is held at the Bayerische Staatsbibliothek in Munich (Mus. pr. 20369). Previous editions of this piece (Beethoven 2016) have noted that the 1870 edition apparently corrects a number of errors found in the 1867 edition. Given that the manuscript which served as the basis for the 1867 edition is lost, it is impossible to determine whether Nohl’s errors are due to his own misreadings, mis-engravings, or Beethoven’s writing, although Sieghard Brandenburg has argued that the errors were probably in the manuscript (Beethoven 2002: 13). Joanna Cobb Biermann has pointed out (Beethoven 2016: 6) that Nohl may have been involved in the production of the 1870 edition and it seems believable that, if so, he might have taken the opportunity in the later edition to correct errors made in his 1867 edition.

Barry Cooper has argued (1984) that sketches produced by Beethoven in 1822, at least 12 years after the initial completion of the piece, embody the composer’s final artistic intentions for the work, and has published an edition of the piece based on these sketches which is substantively different from the familiar version (Beethoven 1991). Although significant, Cooper’s findings are not sufficient grounds for disregarding the 1870 edition, not least because this is the familiar version which has come down to us through history.

For these reasons, we have used the 1867 edition as the source for our edition, although we have also referred to the 1870 edition in order to correct errors.