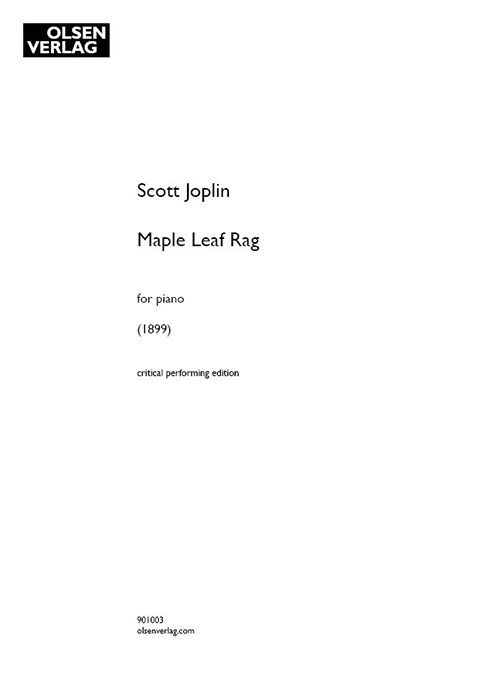 Scott Joplin’s Maple Leaf Rag was his first published rag, and still one of his most popular compositions. Our new critical performing edition, edited by James Olsen and Elliott Park, is underpinned by the highest standards of musicological scholarship, and presents the musical text in clear, crisp print. It is accompanied by an historical note, an explanation of the sources used to produce the edition, and a detailed critical commentary. Printed on high-quality paper, it is robust enough to endure years of use.

Twenty-five dollars. That is how much money Scott Joplin (c.1868–1917) received for his first published piano rag in 1899 (Berlin 2013). Thankfully for him, he subsequently instructed a lawyer, as his next publication, the Maple Leaf Rag, had sold around half a million copies by 1909 (Berlin 2013). Even though it was rejected by an earlier publisher for fear that the music’s difficulty might ‘hinder sales’ (Reed 1975: 270), it turned out to be a huge success when taken on by American publisher John Stark & Sons, and ‘catapulted the composer to eventual worldwide fame’ (Reed 1975: 270). The Maple Leaf Club, where Joplin worked as pianist between 1898 and 1899 and after which the piece was named, also benefitted from the rag’s acclaim (Berlin 2013).

As well as promoting one of Missouri’s ‘black social clubs’ (Meacham 2016), Joplin has been praised for contributing to the ‘preservation of black rhythm’: Stewart and Duran claim that, through the use of elements of African American folk music such as pentatonicism and antiphony, Joplin ‘sought to create an African American musical expression that would be predicated upon an African American vernacular style—ragtime’ (Stewart and Duran 2007: 95–7). The syncopated rhythms used in ragtime were influential in other genres, adding ‘spice and topical appeal’ to American popular music (Hamm et al. 2014).

The popularity of Joplin’s music receded in the early twentieth century, but the Maple Leaf Rag was an exception after it was ‘absorbed into the jazz repertory’ (Berlin 2013). Though strongly related to the popular music of ragtime and famous among jazz musicians, this piece, as with Joplin’s other rags, has been regarded by some commentators as classical in nature, and not to be used as a ‘vehicle for improvisation’ (Berlin 2013). A large-scale revival of Joplin’s works began in the 1970s, sparked by the New York Public Library’s publication of The Collected Works of Scott Joplin, and Joshua Rifkin’s 1970 recording Piano Rags by Scott Joplin. Thanks to this publicity, Joplin’s music is still heard today on TV, radio, and even sounding from ice cream vans. Despite calls for ‘faithful renditions of his scores’, the Maple Leaf Rag is the ‘most imitated rag of the period’ and made a significant contribution to Joplin’s title of ‘ragtime’s greatest exponent’ (Berlin 2013).

No manuscript of this piece survives, as is the case for almost all works by Joplin (Bolcom 1972: 147). The first edition of Joplin’s Maple Leaf Rag was published in 1899 by John Stark & Sons (St. Louis and New York). A reprint of the 1899 edition dating from 1911, but identical to the 1899 edition other than for the cover, is held at the Library of Congress (M31.J case). Joplin had a personal relationship with Stark’s publishing company (Berlin 2013) and, according to William Bolcom, ‘did not benefit or suffer from much editorial supervision’, with the result that ‘we can be fairly sure that, in the main—except for mistakes—Joplin’s music was printed more or less as he wrote it’ (1972: 149). No existing scholarship has cast doubt on the reliability of the 1899 source. For these reasons, we have based our edition on the 1899 edition.