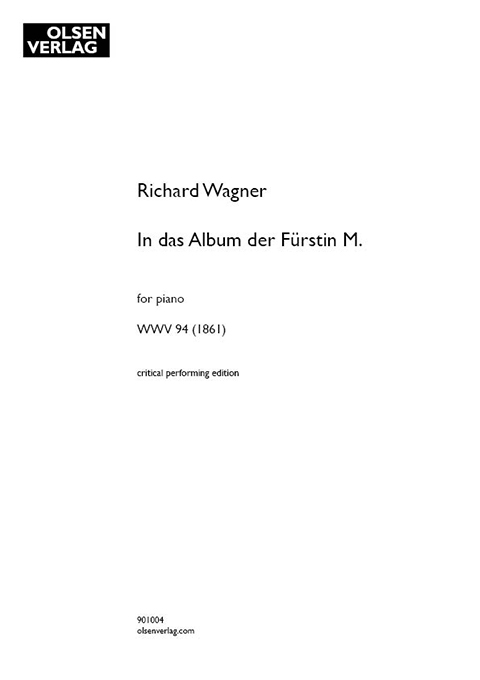 Despite its brevity and simplicity, Richard Wagner's In das Album der Fürstin M., written as an album leaf for Princess Pauline von Metternich, is unmistakably Wagnerian, dating from the time the composer was working on Tristan und Isolde and Die Meistersinger von Nürnberg. Our new critical performing edition, edited by James Olsen and Elliott Park, is underpinned by the highest standards of musicological scholarship, and presents the musical text in clear, crisp print. It is accompanied by an historical note, an explanation of the sources used to produce the edition, and a detailed critical commentary. Printed on high-quality paper, it is robust enough to endure years of use.

Wagner’s (1813–1883) legacy is, like most of his pieces, colossal. Significant not only as a composer but also as a writer and thinker as a result of his ‘programme of artistic reform’, contributions to late romanticism, ‘development of the orchestra’, and prolific and opinionated writings on a huge range of subjects, ‘no composer of the post-Wagnerian period can be said to be untouched by his influence, even if only in a negative sense’ (Millington et al. 2001). Wagner has also borne much criticism, not least for his antisemitic essay ‘Jewishness in Music’ (1850), and in Israel his music has been subject to a ‘seven-decade unofficial boycott’ by many organisations and individuals (Sherwood 2012).

Although his operas and music dramas of course lie at the core of Wagner’s output, his piano works are by no means insignificant. According to one commentator, ‘no other predominantly operatic composer of stature (with the possible exceptions of Rossini and Richard Strauss) has left behind a body of keyboard music which is so varied, so chronologically widespread, and so stylistically enlightening’ (Timbrell 1974: 9). This is perhaps more than can be said of Wagner’s actual piano-playing, which Franz Liszt described as ‘not worth a shot of powder’ (Metternich-Sandor 1914: 815).

Wagner’s piano works can be separated into two groups. The first, dating from between 1831 and 1832, were composed during his years as a student in Leipzig. The second, composed between 1840 and 1875, were ‘dedicated to particular individuals at various points in his life’ (Millington et al. 2001). Wagner explained that In das Album der Fürstin M., one of only seven works from this second group of compositions, derived from ‘a pretty motive which had floated in [his] mind a long time’ (Timbrell 1974: 8). Attributed to its ‘drooping melodies and arpeggiated accompaniments’, the piece has been arranged for many combinations of instruments, such as cello and orchestra, and harmonium and piano.

The ‘Fürstin M.’ of the title, the piece’s dedicatee, was the socialite Princess Pauline von Metternich, to whom Wagner was grateful for her role in enabling the Tannhäuser productions to take place in Paris in 1861 (Timbrell 1974: 8). Small redress, perhaps; the Tannhäuser reception in Paris was famously poor, Metternich one of its principal victims.

Two manuscripts for this piece exist: an early version, held at the Haus Wahnfried in Bayreuth, and a later version, held by Dr Ewald Hilger in Düsseldorf (Wagner 1970: 118). The first edition was published in 1871 by E. W. Fritzsch (Leipzig). A copy is held at the Bayerische Staatsbibliothek in Munich (2 Mus.pr. 5299). Carl Dahlhaus noted that the Düsseldorf manuscript is identical to the first edition, with the exception that the tie in the right hand between bars 14 and 15 is missing in the manuscript (Wagner 1970: 118). For these reasons, we have used the 1871 edition as our source.