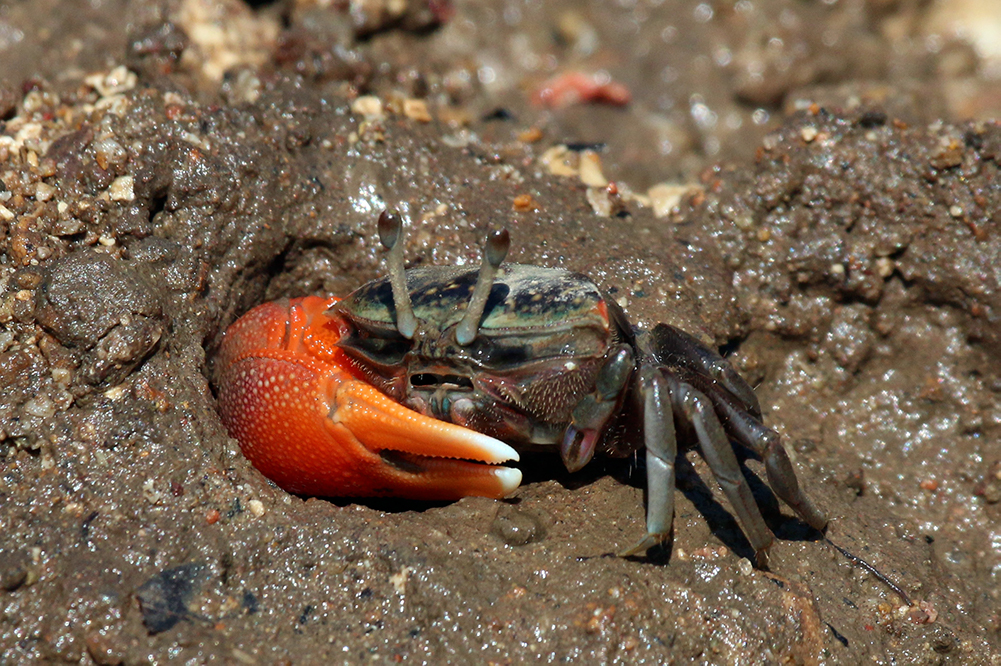 In music, having one overdeveloped claw is not a recipe for success

Some crabs are distinctive for having one claw which is much larger than the other. Marine life is not one of my areas of expertise, but Wikipedia informs me that only the male crabs have this feature, and apparently use the large claw for fighting other males, and to perform ‘waving displays’ when courting females.

When I started to write this piece, I was delighted to discover that these crabs are known as ‘fiddler crabs’, because the larger claw supposedly looks a bit like the crab is playing a violin. Perhaps the person who came up with this term wasn’t very familiar with what violins look like, but you can sort of see what they’re getting at from the picture above.

I think far too many musicians end up being like fiddler crabs. It is easy today to find yourself with an overdeveloped ‘claw’, not in the sense that one hand becomes larger than the other (although I have known pianists whose left hand lags behind their right), but that certain aspects of a student’s musical development are more advanced than others.

A common complaint I hear from those who teach music is that students can be hugely advanced in certain areas, but far behind in others. I have heard of students who might be technically capable of playing the Mendelssohn Violin Concerto, but do not understand any of the harmonic progressions in the music. I have taught undergraduate music students who struggle to read bass clef or identify basic key signatures.

This matters, because performing classical music is never simply about having the technical skills to play the notes. Performing involves some form of understanding. There are of course different ways to understand music, and there’s a fruitful conversation to be had about what ‘understanding music’ means, and who gets to decide what it means, in the first place. But I think most classically-trained musicians would agree that having at least a rudimentary knowledge of music theory and music history are necessary to perform this repertoire.

Why, then, do musicians end up with such a huge mismatch between different skills? One reason might be that music education is often not particularly ‘holistic’: in our ultra-specialised world, where no single person could possibly hope to grasp all human knowledge, it is easy for music education also to become specialised, with the result that institutions are more focused on producing violinists or trombonists than they are musicians.

Another reason, to put it bluntly, is that a lot of musicians find the ‘academic’ aspects boring. When I was a teenager, I remember how many friends rolled their eyes at the prospect of having to pass their Grade 5 Music Theory exam, which is required in order to take Performance Grade 6 and above. I think this was often because students (and perhaps their teachers) did not see the relevance of theory to performing. Again, then, this is a failure of music education to be ‘holistic’.

I’m tempted to say that the problem might be further exacerbated in our digital age when many artists are looking to give their audience an instant ‘wow’ on social media. Dazzling virtuosity is impressive, and might well give your audience a hit of dopamine in a ten-second video on Instagram or TikTok, but performing music sensitively and imaginatively requires a lot more. I’m aware that a similar argument was made in the nineteenth century by those who questioned the value of virtuosic music by Liszt, Paganini and others. I wouldn’t say virtuosity was bad per se, but it’s only one aspect of performing classical music amongst many.

If music education is to avoid producing the equivalent of fiddler crabs, we need to develop students as all-round musicians, and to show them the value of being an all-round musician so that they are motivated to develop in this way. The ability to sing, to score-read at the keyboard, to transcribe, to conduct, to analyse harmony, to know some music history and even to dance are all invaluable skills for any musician. We have lots of claws: let’s make sure they all get proper attention.

Studying music
Subscribe to the Olsen Verlag newsletter to stay informed about our latest articles and scores.